KEEP CALM AND READ ON

YOUR HOST
THE RESTAURANT
THE BUILDING

“Whats up with the name Jones Wood Foundry” 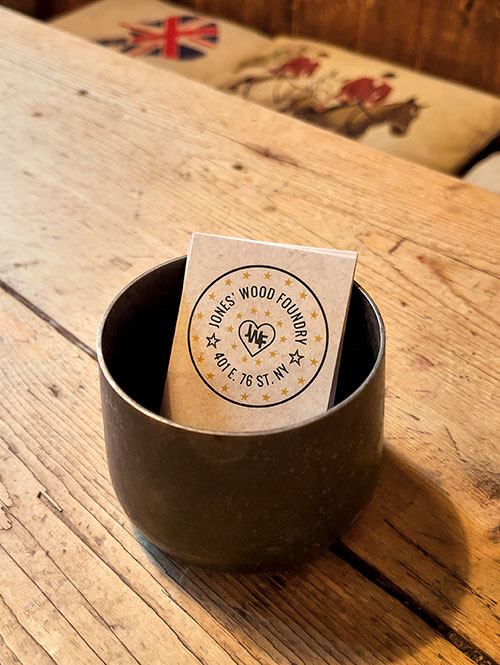 Well, I spent a lot of time researching the history of our unique space and the part of the Upper East Side it sits in. The entire area was actually bequeathed to the city by Robert JONES and  at the time was made up of WOODland.  Meanwhile, the basement where our kitchen is now located was a FOUNDRY that forged manhole covers for the streets of New York City. I think the quirky name works well with some of our quirky-sounding offerings like Banoffee Pie, Bubble & Squeak and of course the Bangers supplied to me by my good friend and master butcher Peter Myer from Keswick, Yorkshire.

Rooted in the proud tradition of the United Kingdom’s public houses as a genial gathering place for convivial eating and drinking, Jones Wood Foundry is a food driven pub. The menu, created by Chef/Owner Jason Hicks, represents the best of time-honored British culinary traditions that have been reinvigorated for 21st-century palates.

Every aspect of this Upper East Side pub and restaurant has been carefully crafted to evoke a sense of ownership among patrons, to assure they feel it’s “theirs, an extension of their homes”. Jones Wood Foundry is always warm and welcoming for a quick drink at the expansive bar, casual snack, and conversation at the communal table overlooking a secret courtyard garden, or for a leisurely meal in the cozy dining room.

The Englishman In New York

From: Stratford upon Avon England

Early years of career: Small country house hotels in Essex and the cotswolds England, before moving to Scotland to work at The Gleneagles Hotel

Our dining area is safe and still cozy.  We installed an Air Filtration and Ventilation system to keep the air clean and the virus away.  We have also added glass separations between the tables.

Disinfection dispensers are available around the location.

The Bar Room is an airy brick-walled space with wrought iron and stained glass. The skylight and wall of French doors flood this through-way with light.

Our hidden winter garden got a complete makeover. You will sit in a dry and heated outside area, where you can escape the madness of daily life as you will feel thrown back in our authentic set up of a British Pub. We installed a large awning to cover you from the heat and then before winter, the company Urban Umbrella installed a high roof to ensure a maximum airflow so that space will maintain germ-free clean air.

We added a seating area for you at the front of Jones Wood Foundry.

Also, this sidewalk terrace has been covered with a very high canopy by Urban Umbrella. In winter heaters will to keep you warm & cozy.

Book a table on OpenTable

A Bit Of History

Built during the last quarter of the 19th century, likely between 1875 and 1885, the building now housing Jones Wood Foundry reflects what was common architectural practice for the area at the time–the ground floor and basement were designed for commercial activity, while the upper floors were residential.

The commercial floors of 401 East 76th were devoted to a hardware and plumbing supply business operated by a member of the Eberhart family, which owns the building to this day.

As an adjunct to that business, a foundry was located on the premises to address the growing city’s cast iron needs, such as decorative railings, staircases, doors, building fronts, weathervanes, lampposts, boot scrapers, and manhole and coal chute covers.

The production of manhole covers displaying intricate hand-forged artistry was the specialty of the Eberharts’ foundry. Jones Wood Foundry’s logo is one of the actual manhole covers produced in the original foundry.

The Upper East Side

Before it was the Upper East Side, Yorkville or Lennox Hill, the area between 66th and 77th streets, framed by what are now Third Avenue and the East River, was known as Jones Wood. The most densely forested land on the isle of Manhattan, it was named after John Jones, who had purchased more than half of its 150 acres in the early years of the new republic of the United States of America. By the 19th century, it had become a popular destination for city dwellers, a verdant escape from Manhattan’s increasingly urbanized landscape, boasting such attractions as bowling, billiards and donkey rides, along with beer gardens and facilities for sporting events and large public gatherings.

In fact, Jones Wood has been characterized as “America’s first amusement park” and it almost became Manhattan’s official playground. In 1853, it was one of two tracts of land cited by the state legislature as possible locations for “a great park,” reminiscent of Europe’s lavish public spaces, that would address the recreational needs of the growing city. The other was what became Central Park, an area deemed more suitable than Jones Wood because it was more conveniently located and thus more accessible to the populace it was to serve. Jones Wood remained a fashionable bucolic retreat for most of the remainder of the century, although its acreage was steadily encroached upon as the city moved northward.

An 1894 fire that destroyed eleven acres signaled the beginning of its demise; its fate was subsequently sealed by the emergence of the more sophisticated entertainments of Coney Island, which had become geographically desirable to Manhattan-based day trippers with the debut of the Brooklyn Bridge and the electrified trolleys that traversed it. By the dawn of the 20th century, developers had gobbled up the rest of Jones Wood, leaving virtually no trace of the once lush forest, except for a little known space called Jones Wood Garden, a private hidden plot surrounded by twelve circa 1870s townhouses on 65th and 66th Streets, between Lexington and Third Avenues. That secret garden is now joined by Jones Wood Foundry in a salute to the memory of the long lost woodland as a welcoming gathering place for convivial pursuits.

~We Take Your Safety Seriously ~

Item added to your cart

Continue Shopping Go To The Cart